Peter, do you love me? 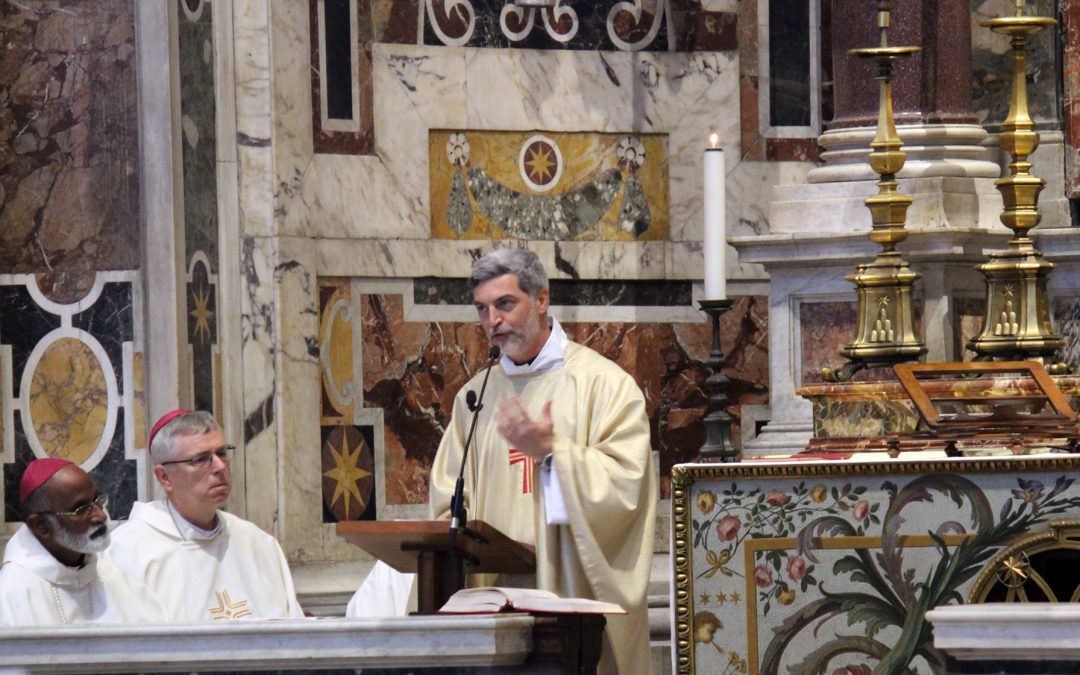 We are living in a historical moment for the universal Church. The establishment of a unique service for the Catholic Charismatic Renewal is much more than a simple “administrative reorganization”. It is not the fruit of a desire of centralization or of exclusion from the services provided by ICCRS and the Catholic Fraternity.

The birth of CHARIS is the fruit of a profound understanding of the identity of the Charismatic Renewal as a current of grace. An understanding from the Church itself, which takes the initiative through its maximum representative, the Holy Father, to constitute a unique service for all the expressions of this current of grace, without excluding anyone.

It was not the Charismatic Renewal that asked the Pope to create this service. It was the Pope himself, in the exercise of his pastoral ministry, of his solicitude for the whole Church, who wanted to erect this service, so that this current of grace could, on the one hand, reach everyone and everywhere in the world, and on the other hand, so that it would remain open to the impulse of the Spirit, avoiding an hierarchical or selective leadership in relation to the countless expressions of this stream.

The text of the Gospel that we have just heard is absolutely providential! It is a fantastic dialogue between the Risen Lord and Peter, the head of the apostolic college. We are participating in a meeting with important leaders of the Charismatic Renewal from all over the world and – as leaders – it is not difficult for us to put ourselves in Peter’s shoes.

Jesus, through his greatest representative on earth, Pope Francis, challenges us, challenges the servant leaders of the Catholic Charismatic Renewal in the world.

The text is very rich and certainly, we could say many things about it, make many exegetical and spiritual analyses. Many of you, as baptized lay people, full of the power of the Holy Spirit, can preach much better than I do. However, with humility, I would invite you to a simple reflection on the gospel. I believe that it offers us at least three important impulses.

First, the only condition for the exercise of leadership is love, a love above average: “Peter, do you love me more than these?”

Second, the mission that the leader receives is to serve the flock; it is shepherding: “Feed my sheep.”

Third, the form of doing that is following God’s will: “Another will dress you and take you where you do not want to go…You, follow me.”

The context of this discourse of Jesus (the beginnings of the early Church, in the presence of the Apostles who must give continuity to his mission) leads us to a fourth impulse: the environment of the exercise of this mission is the communion..

Love: Even though he fled at the hour of Jesus’ passion and he denied him, the Lord confirmed Peter as head of the group of apostles. Jesus did not give him a scolding, he did not “throw in Peter’s face” that he had promised to remain faithful, but he ended up betraying him. Jesus asked a single question: “Do you love me?” For Jesus the only thing that mattered in order to confirm Peter’s authority was love! That is all that matters.

However, a word sometimes goes not noticed: “Do you love me more than these?” As a personal testimony, I can tell you that once, this word “broke” me during an Ignatian retreat: Jesus asked me to love him more than those whom he entrusted to me. Because I knew that, I love less than so many mothers, fathers and grandparents, less than so many young people who come to me for a conversation or a confession! Nevertheless, the invitation remains: In order to feed my sheep, I invite you to love me more than these.

To serve, to be a servant leader means to love more! Our only competition should be: who loves more, who serves more? And never: who rules more, who has more power, who is more prominent!

Shepherding: Jesus’ invitation is to be a shepherd. “Feed my sheep!” Moreover, from the gospel we know that to be a shepherd means to take care, to know by name, to give one’s life for the flock. Being a leader is always a function of service. The creation of CHARIS – not as an organism of government, but of service – makes even clearer the essence of its mission: to serve the Catholic Charismatic Renewal throughout the world, to shepherd by witness, by generous surrender, knowing and calling by name all the sheep of the flock (without excluding anyone).

Following: Obedience, in the first place, is to the Holy Spirit, who manifests himself in the Church. The ecclesial nature must continue to be a characteristic note of the Charismatic Renewal. Hence the importance of following the Pope, the visible head of ecclesial communion.

I know that for many of you CHARIS came as a “foreign body”, assome thing that you neither sought nor wanted. “Another will dress you and take you where you don’t want to go…You, follow me.”

However, you have opened your hearts to this grace, to this “surprise of the Spirit”. Because it was an explicit request of the Holy Father. Because it also responds to the original spirit of the Charismatic Renewal, expressed in the Malines Documents: a current of grace, a fruit of the outpouring of the Spirit, which is ecumenical, charitable, that is, open to all who receive this outpouring, open to non-Catholic Christians, open to the service to the poorest.

Communion: CHARIS is a service of communion. Its mission is to “extend the tent”, that is, to help all charismatics feel “inside” this current of grace. Communion is unity in diversity! It is not uniformity. As I used to say when I was a youth minister, communion is a “fruit salad”, not a “fruit milk shake”. In the fruit salad, each fruit keeps its flavor, its context, its form, and each one contributes to the whole with what is proper to it. In the “fruit milk shake”, the flavor of each thing is not well identified. We start to discuss “I think there’s pear”; the other one says, “No it’s apple” or even “it looks like there’s banana”…. Uniformity kills originality. Think of the diversity of the apostles (Peter and Paul were almost like water and oil!). Think of the diversity of the Churches founded by them. Nevertheless, all sought to live in communion with the Mother Church of Jerusalem (and then with the Church of Rome).

There are leaders who only defend unity when it means unity with him/her, when unity means to do things in my own way! They speak of communion to disguise their desire for power and control, to have everyone “united”, in “communion” with him/ her. But there are also leaders who take advantage of the discourse on diversity to look for spaces of power, which they did not have until then.

CHARIS, because it is not a structure of government (nor of power), necessarily places the accent on diversity: communion of diverse realities. All expressions – prayer groups, communities, schools of evangelization, mass media, large and small, with pontifical or diocesan recognition – all with the same right to be served and the same duty to serve humanity and the whole world. All with the duty to respect the “Spirit that blows where it wants and how it wants”.

God wanted Mary to be overshadowed by the power of the Holy Spirit not only at the Annunciation to become the Mother of Jesus, but also especially in the Upper Room… – in the Cenacle – so as to become the Mother of the Church. She, who was full of the Spirit, is the one who implores this same Spirit of love, shepherding, following and communion not only for the nascent Church, but also for us, gathered here in these days of Cenacle.

Tomorrow, with the encouragement of the Holy Father and the vigil of Pentecost, God wants to send us out to the world, having been transformed from how we were when we first started.

May Mary help us in our conversion: so that we may love the Lord more, serve his flock better, follow more faithfully his Word and truly cultivate communion (unity in diversity), as part of that current of graces called Charismatic Renewal.

May Mary, the Woman filled with the Holy Spirit and Queen of Apostles, intercede for us. Amen.